We had a business cum general knowledge quiz for MBA participants at HEC. There were 5 teams of 5 members each. There were 5 rounds with 10 questions in each round. It was a tough quiz I must say. A couple of teams were virtually out after the second round itself because of their abysmal performance. At the end of second round, we were trailing by 1 point but the third round changed it all. We scored 10 whereas the previously leading team scored 5. After that it was just a matter of maintaining the lead and we did it albeit by a narrow margin of 2 points.
So it was a closely contested victory and each of us received a bottle of champagne for the win:). I would say we were extremely lucky because Marvin - the person who did bulk of the scoring was not in our team originally; he joined us at the last moment and helped us win the contest. ;)
Here's a picture of the winning team: 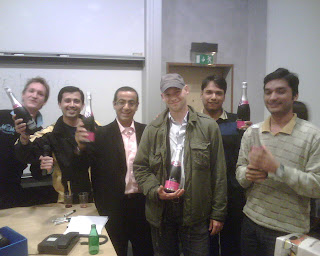 Looking forward to many such bottles of champagne ;)
Posted by Rahul at 4:25 AM

This was actually what I was looking for,This for sharing and keep up the good Information…
paras 3BHK apartments
Paras Tierea property
Paras Tierea sec-137
Paras Tierea flats