I've been out of blogging action for over 2 years now. When I was in an introspection mode during the recent holiday season, I thought I should get back to writing and here I am.. Over the past 2 years, I've done 2 main things - Work and Run.

Work has been crazy - our company has been growing fast and I've been busy in restructuring operations, setting up new systems/processes and establishing overseas entities. The other exciting thing I have done is pick up running.

Sometime in early 2012, I was introduced to Duplays, a venture that promoted Sports in working professionals. I joined the group and started playing basketball/squash with them. In July 2012, I noticed an ad from them about a running group. That drew my attention and I decided to join it - primarily to get fitter.

In Aug 2012, I started training with the running group (about 10 of us with ages ranging from 25 till 45). Long story short, I loved it and became a regular. Started with small distance running and gradually built distance, fitness for half marathon. Ran my first half marathon (ADHM in Delhi) in December 2013 and with the recently concluded SCMM in Mumbai, I have run 4 half marathons till now. I now want to run a full marathon this year but haven't been able to figure out the training plan for that. 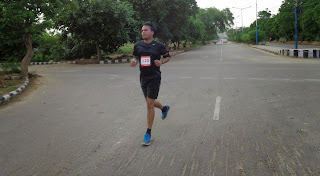 Running is a passion now and I will continue continue writing about it regularly.
Posted by Rahul at 7:10 AM